HEROES OF FAITH: TRUE STORIES OF COURAGE AND STRENGTH by MARLENE BATEMAN SULLIVAN 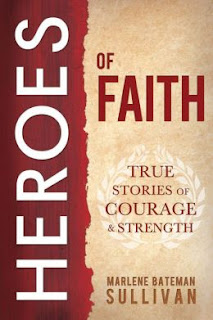 This is one of my favorite type of book I love reading, as it has 24 true stories of faith by LDS people.  Books like these are so faith-promoting and keep your faith and testimony strong with great examples as these Saints.
The first part are by steadfast Missionaries with two young men who foiled the killing of Joseph Smith by William Law and  others, who had been spreading lies about the Prophet.

The next section talks about Missionary Heroes, with stories about Wilford Woodruff and a young man who felt he was too shy to be a missionary and felt he was rude, but he baptized many.

The next segment shares some Challenged Saints, especially a blind Harpist and Curt Brinkman, who lost both legs in an accident, who ended up being one of the first para-olympians who also won the Boston Marathon.

We also have Ellis Reynolds Shipp, one of only wo female pioneer doctors who fought her way through school, illness, raising her children and earning recognition.

The last segment is on War-Time Hereos with two brothers serving together with one saving the other brother's life after another soldier had said the one was dead   Another soldier spent 3 years in a POW Camp in Japan.

I highly recommend this soul-stirring book to everyone, LDS or not, it's that good and for everyone.

Forever Friends
Benton City, Washington, United States
I am owner of LDSForeverFriends Google Group and have been the owner for almost 6 years. We moved to Google 1 Aug of '07. We started on Yahoo on 8 Nov '04. I live in Southeastern WA in a smal town that was my hubby's hometown. I've been a member of the LDS Church 45 years this July '12. I am an avid reader, do a lot of reviews, do indexing and am an avid Genealogist and am a Cancer Survivor. I enjoy life, have three grown children: Mary, 38 in Aug, with two children; William, 18 and Loretta, 15. They live in Rigby, ID; Sarah, 30 in early Oct, has two children Violet, 11 and Gary Lee, 6. They live in Kennewick, close to us, so we see them a lot. We also have Andrew, almost 27, living with me. I start Chemo this Thursday, as it has come back as a different type, this time Hodgkin's Lymphoma instead of Non Hodgkin's. I'll be going once a week, then a week off, for 4 months. I also have Lymphedema, caused from my Lymphoma. Mary married an old classmate from high school she reconnected with on FB and they now have a 6 month old boy named after his grandfather, Bobby Gene. My wonderful eternal soulmate passed on 7 Dec '09.